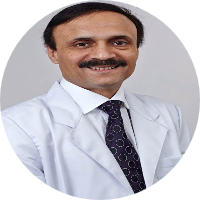 Dr. (Col) Rajeev Sood is the HOD & Director Urology, Robotics Renal Transplantation. Dr. (Col) Rajeev Sood comes with more than 23 years of distinguished services with the Armed Forces and more than 22 years of super specialization in urology. Born on 26th November 1959 and a graduate of the '76 batch of the Armed Forces Medical College, he is a Gold medalist through MBBS, MS and MCh. As a surgeon, he was awarded the Vishisht Seva Medal by the President of India for performance beyond the call of duty. While with the Armed forces he has the credit of doing the first cadaver renal transplant and the first laproscopic live donor nephrectomy in the Armed Forces, he has to his credit more than 1000 renal transplants. He took voluntary retirement from the Armed Forces in the year 2003. Most recently he served as Senior Consultant Urology and Renal Transplantation at Max Healthcare - Saket. He is the driving force behind the Laser Prostatectomy programme in the country. He started Holmium laser enucleation of the prostate (HoLEP) in the year 1999 and later was the first to launch the High energy Green light laser prostatectomy programme in the country in 2003. He has been active in the academic field and has been faculty at numerous Indian and International conferences and operative workshops, with numerous publications to his credit.